It all started with an email, an opportunity to run the Berlin Marathon. This was my chance to run on a track that holds the men’s world record for the marathon. To run a major marathon would be the ultimate experience, I felt. To finish with a PB would wrap it up as a sweet present for my birthday a few weeks later.

After the Sydney Marathon in September 2015, I had taken a sabbatical from running races. I had no interest in marathons, but this opportunity was too good to pass up. 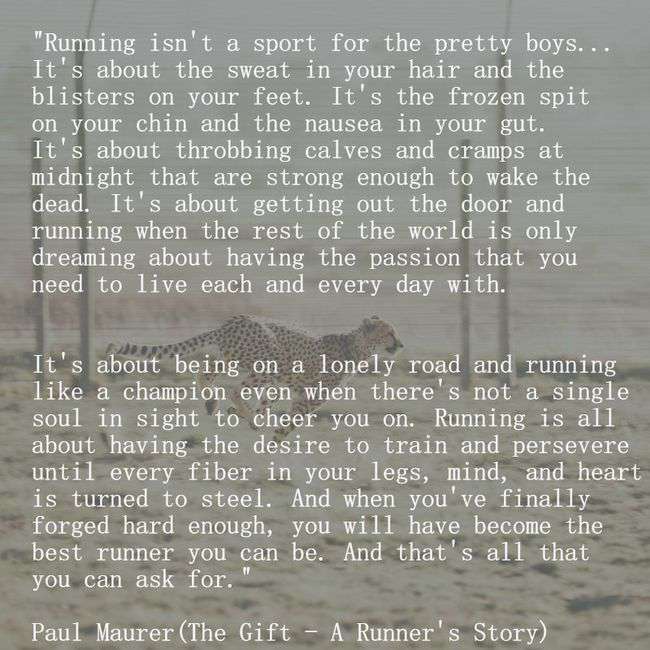 I saw the quote above on Instagram, it resonated with me and has become my mantra, my CTA.

At the same time I also learnt of Ed Whitlock. Ed was remarkable he ran his first marathon in his mid-40’s to give his teenage son company. He went to become the first man in his 70’s to break 3 hours. His running is a fascinating subject. His training consisted of what he called a plod, often for hours, day after day, round and round a cemetery he would run.

I decided I was going to be like Ed when it comes to my running. After all, I would love to still run marathons at 70.

I had nearly a year to train with the simple plan to become the best long distance runner I can be. Start with half marathons each weekend plus short runs during the week. I started getting sore quads due to the sudden increase, so I focused on 60 min runs instead. With the aim of increasing them to 90 mins over a few months.

2017 came and my training was a bit all over the shop. I took time off to holiday in Myanmar in early January. The over indulgence and break did not help. My training was anything but perfect and my shins often gave me grief. I finally settled into a rhythm by April.

Perfect conditions saw me hit a PB at the Perth 32km race in early May. Excited, I quickly set the next goal, another PB, this time at a half marathon race at the end of May. I experimented by going out strong and holding on. It did not work.

Next up the Perth Marathon in mid-June. I was feeling so good at 32 and on track for a big PB. Rather than sticking to my pace, I started to speed up. The build up of lactic had me slam into the wall at 36km so hard that I started cramping up and could not move my legs. I had run out of juice. Another valuable lesson learnt for Berlin.

I recovered well after the Perth Marathon and in the spirit of Ed I ticked the longs off week by week. I was going so well I was scared of pinching myself.

Run after run, no niggles no major fatigue. #runnerbliss

The beginning of the end #

Something happened during an interval session on Mt Henry bridge in early August. I had an odd feeling that something was wrong with my left shin. My body told me not to run but the urge to join a group running 36k that weekend was too strong. This run was my undoing. I hobbled off at 27km, unable to run. 6 weeks out from Berlin and I was done.

The pain on my left shin worsened with each run. The physio asserted that I had presented with shin splints, likely form related she said. In hindsight I should have questioned this as I had been running good mileage, It would be unusual for me to get shin splits. Given I had shin issues earlier in the year. I accepted this to be the case.

I noticed that I was in a lot of pain after every run and recovery that would take me a day, was taking 2 or even 3 days. After my last 10k I was out for over a week, this worried me. I knew then I was not going to be walking after I ran the Berlin marathon. I was still confident I could run the distance on the day. Mentally I worked out that not running for 5 days pre-race will help relive the shin.

The long flight out was a shocker, 25hrs later we were in our apartment. 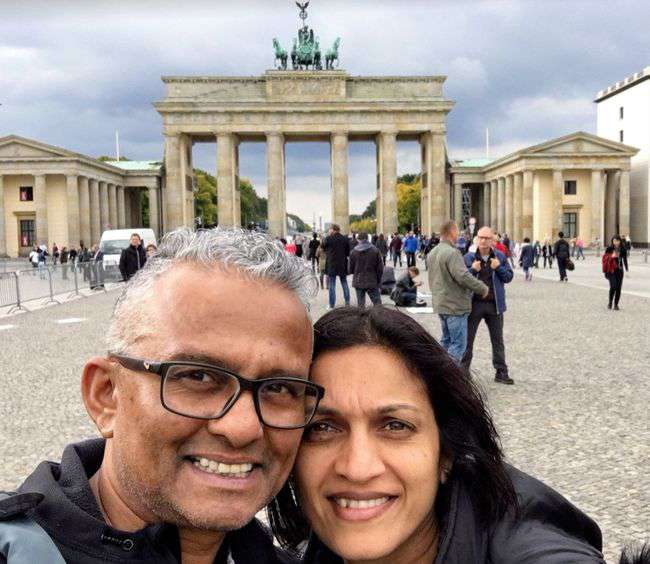 Berlin was magic: great food, drink and so much to see.

Though I walked heaps to sight see, I made sure I had plenty of rest. Hoping my leg would get better but I could not shake that dull pain on the shin. I tried to get a physio appointment for dry needling but did not have success.

At the marathon expo, I was expecting a miracle. New socks, new shoes or some magic treatment, I drew a blank, no new anything, no magical cure. As I left a tad dejected I knew I had to focus on the race now. I was not going to let Berlin beat me, I was going to take this marathon on and smash it. With my mind set, I spent a rest day in bed and the leg had started to feel good.

The race run in my head, was of great expectations, this is all that mattered.

I was in my happy place, good sleep and ready to roll. As we walked past the Brandenburg gate towards the start corral I was filled with much excitement.

The race announcers, introduced the elites and then the runner groups started leaving. As we started to move to the start I found the 4hr pacer and made a beeline for him. I stuck to him like glue and keeping the pace was easy, I never felt like I was gasping. Focusing was the hard part, there were runners everywhere, zero room for relaxing.

Elbows, heels, knees everywhere, it was a bit of an obstacle course for the first 6km and then started to thin. My dreams of passing famous landmarks and appreciating the city faded. I needed to focus on not running over or into someone! Reality is if you are not an elite runner there does not seem to be much space.

13km and I felt my shin pain returning. I ignored it at first. As I felt it a bit more, I reached in my back pocket for two voltaren’s I had carried with me as a back-up to have at 21k, damn! I must have dropped them reaching for a lolly earlier. I fumbled around the pocket but no luck.

By 16km I knew I was out of this race, I could not put any weight on my leg. I tried to change my form, limp, stretch anything that could help. As luck would have it I saw an ambulance. Someone stopped and translated that I was hurting and they should help me. As I stepped into the ambulance, I was saying please inject something in my leg, I have a race to run. I was hoping they could numb my pain and I would be on my way. Sadly they got an emergency call, a life-threatening situation… they asked me to step out and rushed off, telling me to wait at this spot for them.

I decided to continue running hoping the pain will go. I could not even muster a jog, I could hardly walk without pain. I looked at my watch. Mentally worked out I would be averaging 16-18 min to complete a kilometre, this was way too slow.

My first DNF (did not finish) ever. Oh the SHAME!

I notified, my wife on the other-side of the city and my friends on the other side of the world tracking me. As I limped along I saw a U-Bahn sign ahead as luck would have it this was the train line home. As the train moved from station to station it began to fill up with supporters moving from place to place. I felt that someone was watching me. I saw a young girl staring at my race bib and me, my eyes welled up as I stared at her. The weight of what I had done came crashing down on me.

I had given up on a yearlong dream, I sighed and removed the pins on my bib and folded it in 4. I looked up. The girl had tears in her eyes by now and was trying hard to ignore me. I smiled at her to let her know I will be fine. I made a decision there and then I am going to be fine about this. Yes, it hurts, yes, it sucks, but hey I am still alive and I can have another go. My stop came and I tried to stand up, and to move was impossible.

Hospital, not where you want to end up after a marathon. #

It took a herculean effort to stumble off the train and somehow make it to the tunnel wall for support. It dawned on me as I shuffled whilst leaning on the wall. I was not going to be able to climb the stairs and I worried how my wife, would find me. I sat on a seat in the next platform, exhausted. A train pulled in and at the far end I noticed her run out, our eyes met and I relief filled me. From despair to bliss in 10 seconds, she hugged me and I felt better.

She was adamant that we go to hospital but I was certain I would be ok, “I need to rest for a bit and I will be fine”. I tried to sleep but could not and then I realised I could not stand at all. Next stop was the emergency dept and 6 hours later, I left on crutches with an initial X-ray stating I had a possible stress fracture. They said to avoid putting any weight on my leg and I will need to come back in a week for a second X-ray. 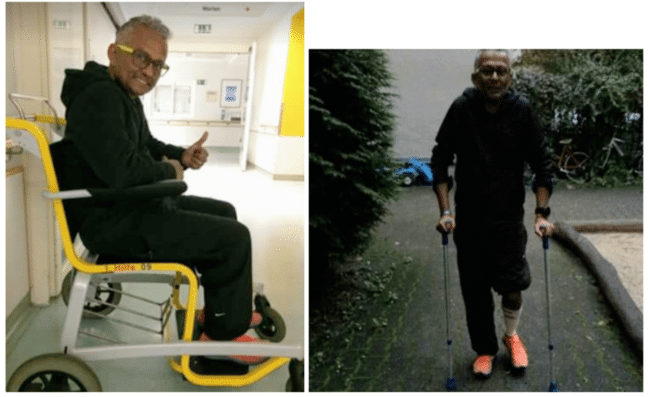 The next day I got a call saying it is a blood clot on the soft tissue and I should be fine bearing weight. I spent the next 2 weeks limping around Germany. I arrived back in Australia on my birthday and went to the GP the same day. He was afraid that my arthritis would be coming back and suggested that I go for a bone scan. That weekend I got my results and sighed in relief, I finally knew what was wrong.

2 stress fractures on the shin. I must have already had one and obtained the second during the race.

Berlin did not beat me, Berlin taught me: # 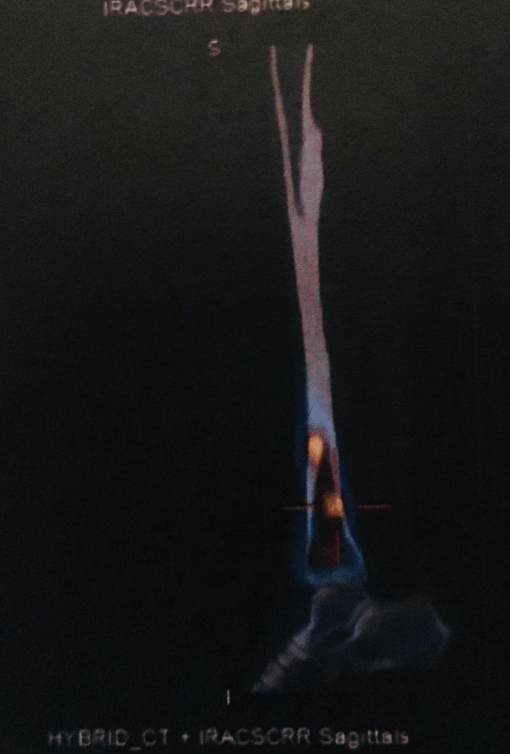 I am thankful this happened to me because I am even more determined to be better tomorrow than what I was yesterday.

If I can add to my CTA. Knowing what I know now, I’d say the following:

The gift , is not complete by running alone. It must be complimented by the desire to sleep, rest and eat well. If you nurture your gift in this way, you’ll certainly be the best runner you can be.

I will be the best I can be. Soon.

Marathons Are For Mad People

As I looked at the Kata Tjuta glimmering on the horizon I felt my body melt into a trance. The enormity of where I was and what I was doing was sinking in. My ability to control my spirit had vanished as I allowed the colors and calmness... Continue →